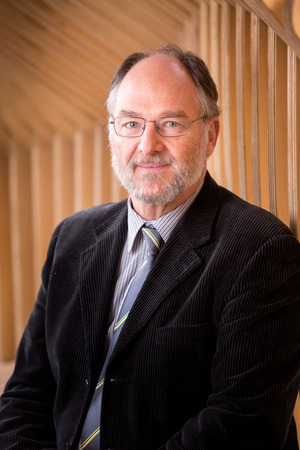 Interviewed and written by James O'Donnell

Associate Professor Jim Black is a public health physician and global health expert with extensive and diverse career experiences ranging from working as a clinician in Mozambique to leading the epidemiology department in the Victorian Infectious Diseases Service (VIDS) at RMH. During his PhD he travelled to a newly independent East Timor to assist the World Health Organization with disease surveillance and epidemic preparedness.

He has served as Associate Professor in Global Health in the University of Melbourne’s Nossal Institute for Global Health since March 2007 - in an honorary capacity since 2016. His current research interests centre around the creation of low-cost technologies to support resource-limited health facilities in developing countries. This focus coupled with a passion for interdisciplinary collaboration led him to help develop FREO₂, a foundation of physicists, engineers and medical experts that empower remote health centres lacking reliable electricity to provide oxygen - a life-saving treatment for children with pneumonia.

I describe myself as a health worker. I really believe that health is more than just the absence of disease.

One of my early influences and mentors was Ken Newell, who at one point headed a division of the World Health Organization. I really like the way he put it in a book he edited - “Health by the People” - where he put forward the argument that nobody would define success as the absence of failure, so we should not define good health as the absence of disease.

If you have read Anna Karenina by Tolstoy, there is a very famous sentence: “Happy families are all alike; every unhappy family is unhappy in its own way.” I think the inverse is true when it comes to health - good health is something unique and different for every individual, whereas people with diseases tend to resemble each other. It’s much easier to learn about diseases, then it is to learn about individuals and what constitutes good health.

If you start thinking of yourself as a health worker rather than as a treater or even preventer of diseases, then that opens up all sorts of possibilities. A medical degree is a good start, but it tends to focus on disease. Defining myself as a health worker means that I can spend the day welding the frame for a new prototype oxygen storage chamber and still feel like I’m a health worker.

We did it right with the 1998 cholera outbreak in Mozambique. There were cholera outbreaks in neighbouring countries and in the south of the country long before it got to us. We had more than enough time to stockpile equipment to prepare a ‘Kit 30’ and ‘Kit 300’ - little medical kits that were enough to treat the 30 and 300 patients respectively. They fit in the back of a LandCruiser, the other on a small truck, which meant that we could quickly send out an anti-cholera response to any health facility in the province.

We worked out that the cholera was likely to come first to the provincial capital, so we designated the old nurse’s quarters as the cholera ward. We worked out a roster appointing everyone’s individual duties, we stockpiled swimming pool chlorine, and we had Mozambican Red Cross volunteers all ready to get their hands dirty.

The first case was diagnosed at 6:00AM on a Friday. We opened the cholera ward at 9:00AM on the same day. By midday on the Saturday the Red Cross volunteers were going house to house in the affected area chlorinating household water stores.

During the nine weeks of the outbreak, we had the lowest incidence and fatality rate in the country. My colleagues liked to tell me “Well you were lucky!” We didn’t like thinking about it that way, we like to think we were prepared!

I came back from Mozambique thinking that I needed to do something more detailed - more for my own sake than anything else. So I started a PhD on disease surveillance at Monash. I was looking at some interesting statistical methods including an artificial intelligence concept called artificial neural networks.

In the midst of that arose an opportunity to go to East Timor. As you may know, in August 1999 the then Indonesian president gave the people of East Timor a vote for independence. The vast majority of them voted to leave and become an independent country, so the Indonesian military torched East Timor down and destroyed 95% of the infrastructure. Following that a UN sanction military force - mostly Australians - came in and ran the country for about two years until East Timor gained formal independence.

I arrived in November of 1999 as the senior epidemiologist for the World Health Organization, responsible for disease surveillance and outbreak preparedness. There was a sense that the role of us outsiders was to ‘keep the patient alive’ - as East Timor had been seemingly devastated by the departure of the Indonesians. Some of us believed though, that there were people around who could form a successful sovereign government. It was our job to find and help them. We were keen to see Timor’s people take charge of their own destiny.

Ultimately if we are helping to create a new independent country, we need to be designing the systems and structures that allow the country to function autonomously. I like to think of the three S’s: systems, structures and sovereignty. We created systems for disease surveillance that empowered us to monitor diseases with outbreak potential. We created structures through which a new Timorese government would be able to modify and run those systems. And the underlying reason for all of this is sovereignty: in creating a sovereign state, the people from that state ought to be in charge as soon as possible.

Pneumonia is actually the biggest cause of death in children under five. There unfortunately isn’t a straightforward way to tackle it.

At the Nossal Institute for Global Health we ran a little symposium called the “No Limits” symposium. An audience of scientists and engineers listened to presentations by clinicians and the healthcare problems they take on.

Dr. Trevor Duke, Australia’s leading pneumonia expert, gave a really interesting talk on oxygen concentrators as therapy for pneumonia, and how they have huge therapeutic potential but are limited by low power availability in resource-limited settings. The physicists in the audience picked up on that and from that came a range of innovations, including the FREO₂ Siphon electricity-free concentrator and the FREO₂ Low Pressure Oxygen Storage (LPOS) system.

FREO₂ has since grown into quite a large program in Australia - it is a non-for-profit that is driven by the belief that “every health facility that cares for in-patients should have a reliable supply of oxygen.” A deceptively simple concept that actually needs a major paradigm shift in the coming years.

Don’t worry if what looked like the perfect path turned out not to be. If for example you thought being an ophthalmologist was going to be the most fulfilling career for 40 years running, and after your first few years as a registrar you think it’s actually not, don’t feel like you have failed. You just haven’t found the right match yet.

There are times in your life where it’s appropriate to devote yourself entirely to medicine, where you’ll put your hand up for doing Caesarian sections in the middle of the night, or the time when I was on-call for 10 months straight in Mozambique and somebody always had to know where I was for 24 hours of the day. At that time I really relied on my colleagues to help me survive: “We called him a lot last night, let’s give him sleep tonight.” I used to carry a big stick working at the health centre at night because I would hear hyenas sneaking around.

And then there are times when you have got small kids and it’s not so appropriate.