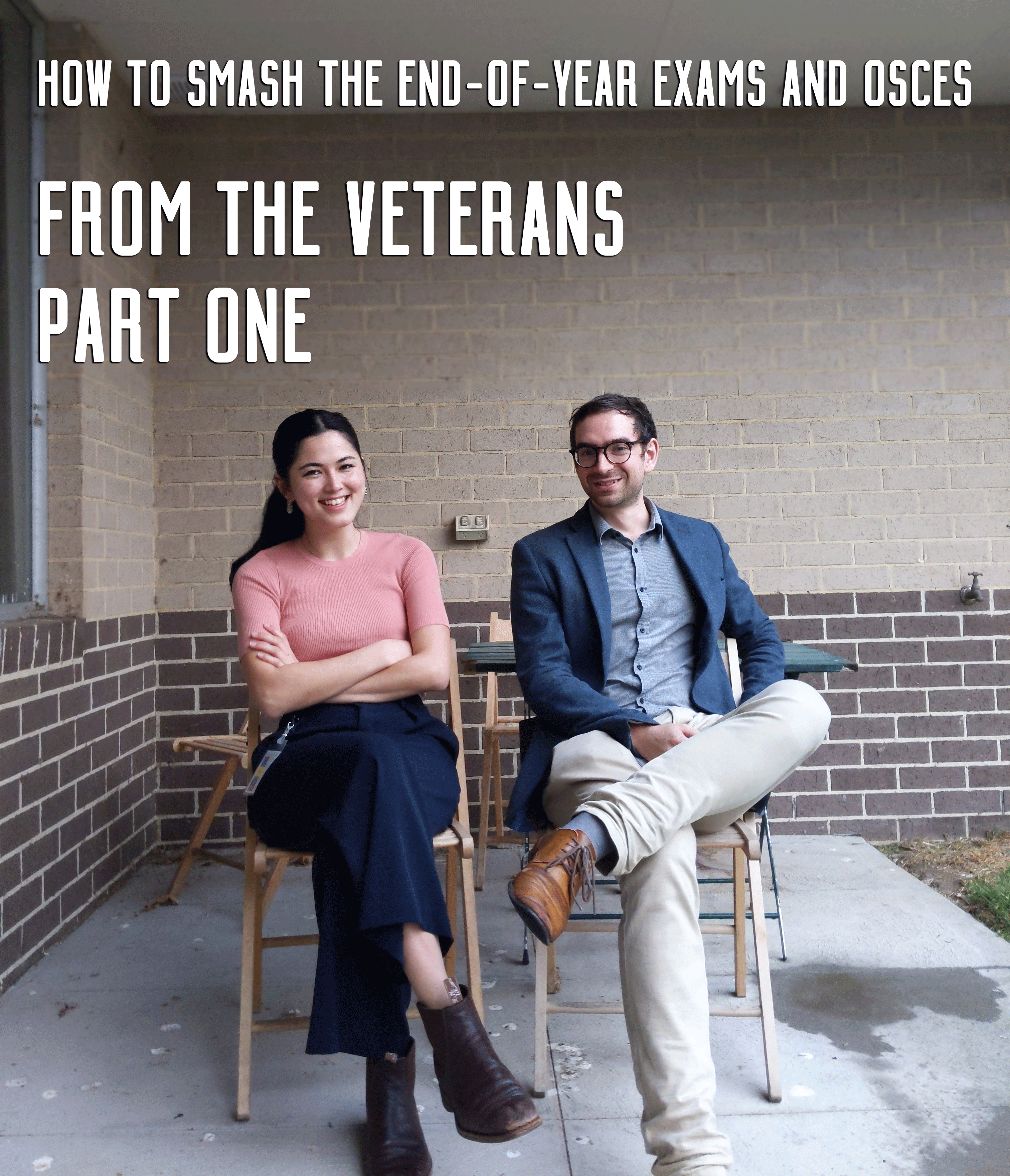 Meet Emily Warton and Daniel Hynes, two friendly Victorian doctors who have recently graduated from Monash University and the University of Melbourne respectively 👩‍🎓👨‍🎓. Emily is currently a medical intern with Monash Health, and Daniel is a general medicine registrar with Eastern Health👩‍⚕️👨‍⚕️. They have gathered to share their best tips on how to tackle the impending challenges of end-of-year medical school written exams and OSCEs🤓, and engage in some wholesome banter along the way 😜

1️⃣ What was the best exam result you have achieved since starting medical school, and what do you think contributed to that result?

DANIEL: Probably my MD2 exam was my best result. What worked well for me was that I had a good study group – we all just smashed our exam study hard every day and it didn’t feel like as much of a chore when you did it together with a whole bunch of people. We had a vibe where everyone pushed one another, and we connected well enough that we didn’t want to kill each other while studying together. Being a rural cohort removed from the rest of Melbourne, we had an underdog mentality and felt that we had to push really, really hard. It was a pleasant surprise when we found that we had all nailed the exams. 😍

It was the year where Melbourne put up a curriculum of things you needed to know, so I just picked up every condition on the curriculum and learned everything I could on each of those conditions – radiology, pathophysiology, history, examination findings, investigations, management, everything. When I got to the exams it all fell into place.

EMILY: I guess the best result from studying really hard for exams isn’t the exam result itself; it’s the knowledge you have gained that you can now use in your work and life. 🤓

DANIEL: You don’t think about it this way when you’re a medical student, but your (medical student exam) scores are like VCE: the (exam) scores get you into an internship somewhere and it then becomes irrelevant for the rest of your life. What matters in the end is the knowledge you have gained that you need as a doctor when you are managing patients and their illnesses. Of course there are always more irrelevant things that the uni makes you learn - pathology for example - that you put in your brain just for the exam. Afterwards you can use whatever brand of whiskey you need to get that out of your brain. 🥃

2️⃣ If you had OSCEs in a month’s time, how would you prepare for them?

EMILY: I would recruit other people who are hopefully going through the same thing and (in a friendly, congenial manner) bully them into joining my study schedule religiously. Then we would all compile OSCE stations - it’s good to have a rich flow of information between everyone. I guess most universities will have a pool of previous exams and resources; get your hands on those and don’t be sitting outside that pool.

Go through the resources and set up proper OSCE stations. Don’t laugh through them. Act like it’s the real thing. It’s helpful to have an adjudicator to keep time when there’s an odd person out. Get the flow of the each clinical examination right because that’s the most difficult and useful thing to master.

DANIEL: Everything is much better as a group. I lived in dorms and so we would just come into each other’s rooms after lectures were done for the day. We’d pick a system - for example cardiovascular - and we would keep going at it until we got it down to muscle memory. Someone would throw signs at you, and you would eventually get good at putting the pieces together while doing the exam and make a reasonable diagnosis at the end.

I mean OSCEs aren’t that hard. The bit that is tricky is not falling to bits with nerves on the day. The key to that is just muscle memory. All of your exams have to be so slick that when you are really distracted and sweaty and sleep deprived because you couldn’t sleep at all the night before and didn’t have breakfast that morning, you can just into autopilot. All you’re doing on the day is putting the signs together while you’re in autopilot.

Also remember that common is common, especially at the medical student level. If you get asked to do a respiratory exam, it’ll probably be COPD and not something too weird and wonderful. Just remember the common things well.

The best thing you can do for OSCES is to get into the hospital, peel off after rounds, and find and examine all the patients with signs. Otherwise you will get out of medical school and be hearing wheeze for the first time. You don’t want to be in that spot.

3️⃣ How would you prepare for a set of written exams?

DANIEL: You can get away with a bit more solo time with written exams, whereas for OSCEs you really want to do it with someone who can give you direct feedback. It’s really good to do it in groups of three where you rotate roles and learn from all three perspectives. For written exams it’s great having a study group for the motivational vibes and picking up little bits of knowledge that you didn’t realise you were lacking.

EMILY: Also with written exams, if you get something wrong you can make a little database of all the questions you get wrong and go through them again at a later stage as as a separate question bank. You know then that you can get them right if they come up on the actual written exam.

4️⃣ How do you deal with on-the-day exam nerves?

EMILY: You just go into autopilot. There’s not much you can do once you get in whatever mental zone you get into on the day.

DANIEL: Best thing to do, especially if there’s a practical component, is to train it into autopilot as much as you can. But if you can, eat a good breakfast and get a good night’s sleep beforehand.

Also don’t forget to exercise. Everyone always said that to me as a student, and I would just say, “Yeah, great point, but I need to study.” But it actually makes a really big difference to your concentration levels: both when you’re studying, and on the day. If you're physically fit you’re going to be a lot more confident. 🏃

EMILY: Don’t psych yourself out too much. Don’t put the blinkers on. You can always remove yourself from the situation. This is just for one or two hours, and then I’m going to be out in the sun for whatever. ☀️

JEFFERSON: I’ll add another tip - make sure your head is completely clear coming into the exams. What I always used to do before exams was to take time time right before the exam start time to do a breathing exercise. I would count to maybe 100 breaths, so that I could clear my mind of any distracting thoughts. That way you’re completely calm and focused, and 100% in the moment for the entire duration of the actual exam.

The second thing that has worked with me is to visualise yourself succeeding at the exam for the entire month leading up to the exam. Olympic performers do the same thing - I’ve read that gold medalists dream about and visualise themselves winning the gold medal for years before they went and did it. You can apply the same practice to exams. I’ve found that persistent visualisation makes a noticeable difference in your confidence levels, and drives you to make the correct day-to-day decisions (e.g. get proper sleep, not procrastinate, eat well, etc) that lead to exam success.

DANIEL: Fair enough. Relaxation techniques, mindfulness, all that stuff is pretty handy. Even during the exams just be mindful of your stress levels and if you feel that you’re going off the rails, it might be worth that 30 seconds out of your writing time to just stop, take a few deep breaths, destress a little, and then get back into it.

When you’re going between OSCE stations, don’t take the last OSCE station’s memories over to the next station. Leave it behind and move on with a clean, crisp and fresh mind.✨

JEFFERSON: It’s okay if things don’t go perfectly according to plan. Most likely they’re not, and you’ll have questions that throw you off on initial glance. But you have got to have that confidence that no matter what happens, you can make it work. 💪

5️⃣ What has been your most memorable exam experience?

EMILY: My most memorable exam memory was right before our VIA which is the most important exam in our entire curriculum. One of my friends got stung in the face by a bee 🐝. The poor girl. It got her right between the eyes and her whole face became completely swollen up. 🤕 But she just went straight in (to the exam hall), smashed that exam like an absolute champion, and came out. It was crazy.